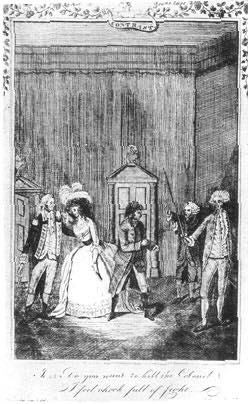 For my friends in the theater or performing arts today April 16, 1787 marks the debut of the first play written by an American premiering where else but Manhattan – a comedy: The Contrast.

The Contrast is the first comedy written by an American citizen that was professionally produced. The play is most remembered for its prologue, which evaluates home-made versus foreign goods and ideas, and for the introduction of the Yankee of stock character.

The Contrast, written in 1787 by Royall Tyler, is an American play in the tradition of the English Restoration comedies of the seventeenth century; it takes its cue from Sheridan’s The School for Scandal, a British comedy of manners that had revived that tradition a decade before. Royall uses the form to satirize Americans who follow British fashions and indulge in ‘British vices’. Thus, the play is often concerned with portraying the contrast between European and American culture.