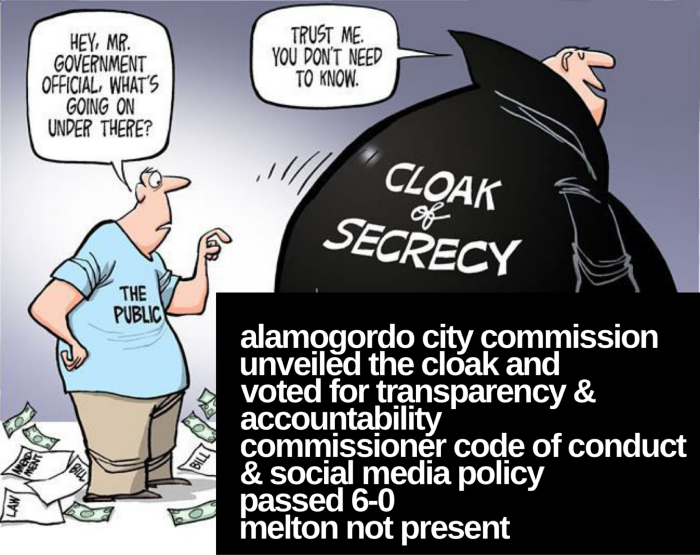 In a very productive meeting of the Alamogordo City Commission tonight the Commission passed the first publication of the City Ordinance that places a Code of Conduct Policy and a social media ordinance into action for the City Commissioners.

Under the leadership of Mayor Susan Payne, the city moved forward with a 6 to 0 vote based on a strong recommendation from the City Manager and the Municiple League to add a local layer of accountability and protection for the citizens of Alamogordo and to commissioners themselves.

Commissioner Melton was not present and made comments in a previous meeting opposing the ordinance. In a text dialog with AlamogordoTownNews.com on October 4th at 7:59 pm Mr. Melton said, ” I made the comment during the last commission meeting about why I OPPOSE the draft code of conduct, in its current form.” He continued, “if changes are made, I will happily vote for it.”

The Code of Conduct lays out a process for conduct and a process for complaints by staff or the citizens of Alamogordo for a breach of such conduct. A chairperson with legal experience would be convened to weigh the complaint and if legitimate they would assemble a review panel to review the compliant. After the review then a recommendation of a fine or censorship or escalation to the state level would then occur. Or if found not guilty of the charge then all would go back to status quo. Citizens abusing the policy would be barred from future complaints via the process in the ordinance.

The other topic that actually had the most dialog was the streamlining of the way business licenses are issued. The new process requires a streamlined application, an inspection by fire first and ensuring zoning is correct then a quick approval by the city clerk. The process spreads renewals across the year to the business application anniversary date verses all 1500 or so of them coming due the `1st of January. There was debate on the fees for missing the renewal and dialog around some verbiage and cannabis but overall was civil and mature dialog. Mayor Payne again explained the importance of the process, there was dialog around public safety and food trucks, but this was another very pro-business approach to streamlining the process and ensuring it was affordable to register in Alamogordo to do business.

Mayor Susan Payne has made it a priority of her administration to show Alamogordo is “Open for Business and Business Growth.”