It’s Halloween and the pressure is on to decorate the home but do we really want paper spiders and cobwebs around the home? The color black is our friend. Paint a flower arrangement black, accent with Crafts from Roadrunner Emporium’s local artist and the color black. Have a wreath, a vase and a few accent pieces splash black paint on them and you have a subtle Halloween look that is spooky but elegant in styling. Check out these simple looks…

Halloween decor can be fun, simple and even sometimes elegant. Check out Halloween elegance and the crafts, arts, home decor and more from the 55 artisans and antiquities partners of Roadrunner Emporium Fine Arts Gallery Antiques and More- 928 New York Avenue, Alamogordo New Mexico we will be opened tonight till 9 pm and opened this Columbus Day Weekend Sunday from noon to 4. 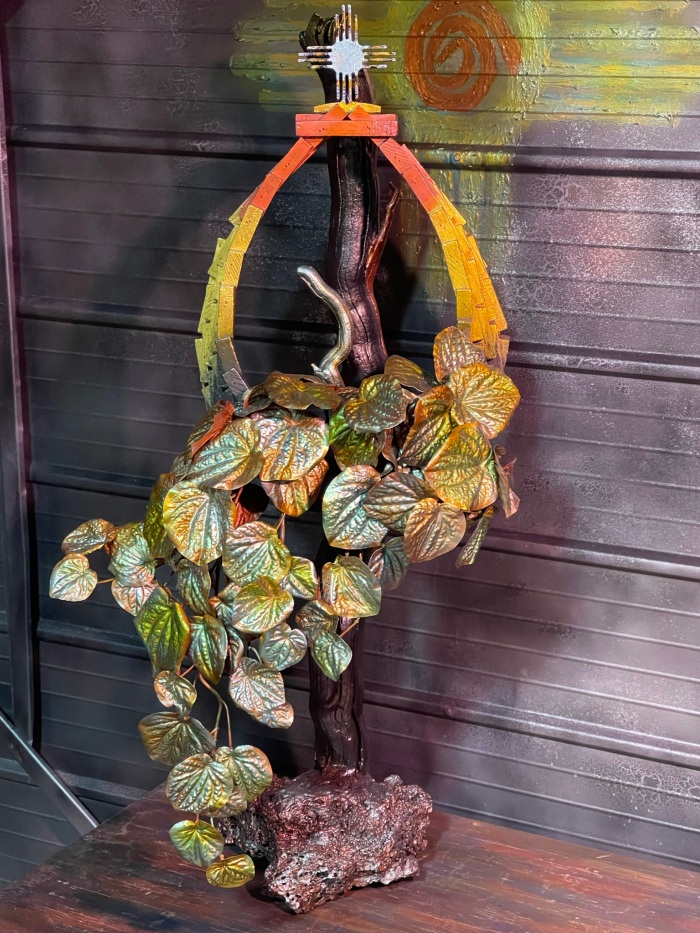 “Angelina” A Flowing Ivy, Abstract Wood Basket and Lava Rock Natural Sculpture by the Artist Rene Sepulveda was crafted as a piece to honor his 80-year-old aunt Bertha Angelina Sepulveda Rommel.
The historic symbolism of ivy, central to the sculpture by Rene Sepulveda as it reaches out of the wooden basket deals with connections of family, because of its propensity to interweave in growth. Ever furrowing and intertwining, the ivy is an example of the twists and turns our relationships and family connections take – but also a testimony to the long-lasting connections and bonds we form that last over the years. Ivy is further considered a symbol of survival and determination for the same reasons. It seems to be virtually indestructible and will often return after it has suffered damage or has been severely cut back symbolic of the indestructability of family.

This is an example of the human spirit and the strength we all have, to carry on regardless of how harrowing our setbacks may have been.

The basket is one of humankind’s oldest art forms, and it is certainly an ethnic and cultural icon filled with myth and motif, religion and symbolism, and decoration as well as usefulness. Taping in the artist Native American heritage of his ancestors he felt a wooden pieced basket was an essential part of this sculpture due to its symbolism and history as a not to his family roots. The Native Americans may well have left the greatest legacy to the world of baskets. The Indians of Arizona and New Mexico made basket-molded pottery from 5000 to 1000 B.C. as part of the earliest basket heritage. Their baskets (many of which have survived in gravesites) are heralded as a pure art form and one that was created not only by a primitive people but also by women. Basketry extended into the making of many other materials the Indians used daily including fishing nets, animal and fish snares, cooking utensils that were so finely woven that they were waterproof, ceremonial costumes and baskets, and even plaques. The Hopi, Apache, and other Pueblo tribes made coiled baskets with bold decorations and geometric patterns of both dyed and natural fibers. Thus, the bold geometric coloring and shape of the basket crafted into this artistic sculptured work by Rene Sepulveda.

The wood of which the basket hangs is of fallen branches that were gathered near the Apache Mescalero tribal basin and symbolize the strength of eternity. This strength lives on and transcends life and death representing the timeless strength of family.

The 5000-year-old lava rock of which is the sculptures base is composed of rock from the Valley of the Fire lava flow originating at Little Black Peak in Southern New Mexico. The selection of this material as the base was to signify the strength of the earth from deep within, as lava flows deep within the earth and periodically erupts, so do the emotional ties of a family. Those ties and emotional connections are buried deep and carry from one generation to the next, and on occasion erupt to show their true inner strength and strong bonds as the foundation of family.

Finally, the piece is capped with a metal Zia symbol. Given that this artistic creation was conceptualized, crafted and created with natural elements of New Mexico, Artist Rene Sepulveda found it only fitting to cap the piece with the Zia symbol which is sacred to the original people of New Mexico, from the Zia Pueblo and who regard the sun as sacred. Four is a sacred number of the Zia and can be found repeated in the points radiating from the circle.

The number four is embodied in:
The compass (north, south, east, and west)
The seasons of the year (spring, summer, autumn and winter)
The periods of each day (morning, noon, evening and night)
The stages of life (childhood, youth, middle years and elderhood)
The sacred aspects one must develop (a strong body, a clear mind, a pure spirit, and a devotion to the well-being of others)

That final aspect in symbolism of the Zia is what ties this artistic creation of Rene Sepulveda, entitled Angeline, together in each of those characteristics that speak of his aunt. She has always been one from youth to age 80 of strong body, clear mind, pure spirit and devotion to her family as well as the well-being of others.

Each component of this work of art independently is of beauty, but when combined into a sculptured work named “Angelina,” from the heart and mind of the Artist, Rene Sepulveda; one sees it spiritual relevance and reverence to family, presented as a visual piece of artistic beauty.

Available to be seen as part of the Valley of The Fire Collection Exhibition of Works of Artist Rene Sepulveda at 2nd Life Boutique and Gallery at Roadrunner Emporium and Fine Art Gallery, 928 New York Avenue, Alamogordo, New Mexico and is available online to ship for free anywhere in the US at https://www.etsy.com/listing/1007837864