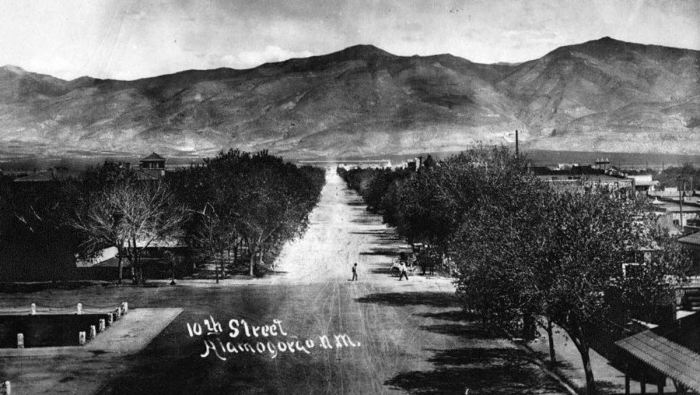 In 1898 Alamogordo was split into two cities: Alamogordo a primarily Caucasian enclave and Chihuahua a primarily Mexican/Latin American enclave. The two were merged in 1912 and became the incorporated city of Alamogordo, New Mexico.

Alamogordo is in the Tularosa Basin of the Chihuahua Desert, it is bordered on the east by the Sacramento Mountains and to the west by Holloman Air Force Base. Alamogordo in modern times is known for its connection with the Trinity test, the first explosion of an atomic bomb.

Alamogordo was founded as a company town to support the building of the El Paso and Northeastern Railroad, a part of the transcontinental railway that was being constructed in the late 19th century.

Initially its main industry was timbering for railroad ties. The railroad founders were also eager to find a major town that would persist after the railroad was completed; they formed the Alamogordo Improvement Company to develop the area, making Alamogordo an early example of a planned community. The Alamogordo Improvement Company owned all the land, platted the streets, built the first houses and commercial buildings, donated land for a college, and placed a restrictive covenant on each deed prohibiting the manufacture, distribution, or sale of intoxicating liquor. Education was a priority and the city founders, Charles Eddy and brother, John Arthur Eddy. The brothers were both strong willed, and constantly battled over the decisions that had to be made. Ultimately, they agreed that interscholastic sports and a strong educational foundation as part of the progressive educational movement of the time would fuel the business interest they were developing.

Tourism became an important part of the local economy from the creation of White Sands National Monument in 1934.

Local Construction began on the Alamogordo Army Airfield (the present-day Holloman Air Force Base) in 1942, and the Federal government has been a strong presence in Alamogordo ever since.

Education has also been an important part of the local economy. In addition to the local school system, Alamogordo is home to the New Mexico School for the Blind and Visually Impaired, founded in 1903, and a branch of New Mexico State University founded in 1958.

Holloman Air Force Base, found approximately 3 miles (4.8 km) west of the city limits, is the largest employer of Alamogordo residents, and has a major effect on the local economy. According to some estimates, Holloman accounts for half of the Alamogordo economy today. The military influence has had a major impact on the diversity and quality of students and athletes that were available to take part in Alamogordo athletic programs for several generations.

According to the 49th Fighter Wing Public Affairs office, as of January 2008 Holloman directly employs 6,111 personnel with a gross payroll of $266 million. It indirectly creates another 2,047 jobs with a payroll of $77 million. The estimated amount spent in the community is $482 million. The influence of the military has had a historical impact on the politics around athletics and other public- school programs since the 1950’s.

A blow to the economy and to the sports programs at Alamogordo High School came when after 27 years of training at Holloman, the German Air Force left in 2019. They moved their pilot training to Sheppard Air Force Base in Texas.

The region peaked in business interests and the regional brains trust in the 1960s with many industries from Levi’s to Space Contractors having offices in the city. The city and region had one of the highest concentrations of space and rocket engineers, scientists and high-tech leaders in the nation for a city its size. The result of this concentration of people helped create a large high school talent pool which aided in athletic and academic success of Alamogordo High School ranking it the 3rd best in the nation during the 1960s.

Due to the concentration of space and military contracts the city and region integrated earlier than many, as being the first in the state. Alamogordo High School set a national example in education and sports, unusual for a city its size. Public education began in Alamogordo in 1898 via a tent city. The tent was used for court on one end, with school on the other end. When court was in session there was no school to attend. During this time, Alamogordo was primarily a tent city and most of the residents were tuberculosis patients.

Meanwhile in other parts of the country more developed than Alamogordo New Mexico, construction of gymnasiums in the high schools became a priority in school development and laid the foundation for the development of indoor sports, particularly basketball and Track & Field activities such as jumps and sprints. Educators by this time saw physical education as intrinsic to the development of American high school youth. Gymnasiums were originally designed for gymnastics and calisthenics instruction, but boys organized games soon took more and more time on the floor space, as educators saw that they had value in their educational mission. Although indoor baseball was played in some high school gymnasiums on the east coast, participants usually searched for larger facilities, such as armories. Eventually, most colleges and many high schools-built gymnasiums with the support and endorsement of business leaders and progressive politicians.

Back in Alamogordo, Dudley School was built in 1914 and had four classrooms. Dudley School was set up as part of a segregation plan at the time and specialized in children that did not speak English being educated in a separate school facility. Hispanics could not go north of 10th Street or into the plaza at the time. The city of Alamogordo, New Mexico with its proximity to Texas was a racially divided city.

Alamogordo High School began an organized sports program in 1912 for Caucasian boys offering PE, Track & Field and Basketball and Football.  The African American School was called the Delaware School and the school that spoke Spanish only was the Dudley School. Athletes from those schools were segregated from the white schools of the time. More on that to follow as we review the 1940’s and 50’s and the cultural shifts that were about to occur in a future story, post or broadcast.